Season 9, Episode 15, The Calm Before 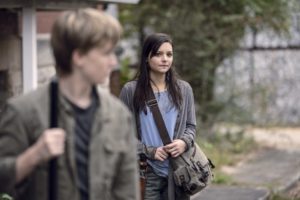 Have you ever been confronted about something, by someone who is guilty of the same thing? My guess is that most of you have had this happen to you. Often the person who accuses you of something, may actually struggle with that very same thing, and they don’t even realize it.  Or even worse, they may know that they struggle with the same thing, they just don’t know that others realize it.  In psychology that is called “projection” and I have seen my share of it in life.  It is also extremely frustrating, especially if there is some truth to what they are saying.

In tonight’s tear-jerker of an episode of The Walking Dead, we see our characters in the same situation that they have been in many times before. Once again, they have to decide whether to take in someone whom they don’t totally trust.  This week it is the ex-whisperer (and daughter of the terrifying Alpha) Lydia.  Henry has taken a liking to her, and Daryl seems to trust her, so Michonne wants to ask the council whether they should let her in.

However, there is a problem with Tara.  She doesn’t like this proposal.

Michonne: I know I haven’t always seen eye-to-eye with everyone in this room. But I never stopped caring about any of you. I was just trying to protect my family and do right by my people. Alexandria’s future is here. Together, with you. And we lost sight of that for a while. But I’m here now. We’re here now.

Father Gabriel: I’ve taken an informal vote with the other council members at the fair, and we all agree. Alexandria is willing to grant asylum to Lydia. She’s one of us now. We hope the rest of you can join us in doing the same.

Lydia: Thank you. I’ll do whatever I can to earn my keep – and pay you back.

Tara: If her mother retaliates, it’s gonna be against Hilltop, not Alexandria. I have to do right by my people. I thought we were on the same page.

Michonne: We were. And, look, when she came to my gates, I asked her to run away. And when she didn’t, I was angry.

Tara: Then you know why I’m not okay with this.

Michonne: I do. I also know why Rick didn’t trust me when I showed up at the gates of the prison. And how people didn’t trust you after seeing you on the other side of the Governor’s firing line.

Rachel: I was gonna kill you on sight when you washed up on our shore.

This was one of those moments where Tara’s past came back to bite her. Most of us may have forgotten that she sided with the governor (remember him?) against Rick and the residents of the prison. But subsequently, people have failed to remember that. Some forgot because a lot of time has passed since the incident, others because they weren’t even a part of the group back then.  But either way, Tara has no ground to stand on when she judges Lydia – because she also has sided with the wrong people.

This reminds me of one of the funniest verses in the entire bible. People forget that Jesus often used humor to illustrate his teachings, and this particular verse is one of the most hilarious. Even though it was said in a different language in a different culture, the joke still kills.

We find this verse in Matthew chapter 7, right about when Jesus is starting to wrap up the Sermon on the Mount.

Yes, this is a funny joke. The image of someone picking at a speck in someone’s eye when they have a whole log in their own eye, is hilarious.  But the image is also very striking and very serious.  What Jesus is saying is that we have to be careful when we judge others, because we will be held to the same standard.  As a matter of fact, Jesus may be implying that judging is something that we (as human beings and Christians) should rarely do.  He is also saying that, when we do, we need to be aware that we are being held to the same standard as those whom we judge.

Tara was called on this during that meeting.  And then she had no choice but to realize that their judgement was fair.  You can’t say “do what I say and not what I do” to people.  When you do, they just won’t listen to you. Fortunately, Tara realizes this about herself and does the right thing and votes Lydia in (it also will be the last thing that she does with our group – RIP Tara).

Just a couple of weeks ago I was confronted by a teenager about the way that I do evangelism. He had attended youth group for the first time in about a year and was very concerned about what he saw. This kid is a quiet kid, raised in a fundamentalist Christian home who has been homeschooled all of his life. But he is very different than most of the kids at youth group. I speak at our youth group every week and I love these kids.  But most of them are unchurched kids who have all kinds of problems and very few of them know Jesus. I love these types of kids and I have been working with these types of kids for decades. The problem that my confronter had with me was that I wasn’t telling these other kids about the “urgency of their predicament.”  What he meant was that I wasn’t centering my teaching on how they were all going to Hell (the irony was that he missed my four week series on Hell a couple months before).

But instead of arguing with the kid about my method of evangelism (I honestly don’t think that it is better than other ways of doing it, it is just my way), I decided to try a different tactic.  First, I asked him if he had tried to share Jesus with any of these kids. He told me that he hadn’t. So I asked him why he felt that he could criticize my method of evangelism, when it was something that he didn’t even do. He just told me that he didn’t know.

Then I read this verse to him and said that I was afraid that he was picking splinters in people’s eyes instead of looking at the log in his own eye.  The fact that he didn’t even share the gospel with others made it hard for him to criticize those who actually do it.

Now I know that may sound harsh to some of you. But I wanted this kid to learn a valuable lesson about judging others (hopefully he will think twice before he does it to another person). But what Jesus said was also harsh.  We need to think about what we say before we say it. And we especially need to think about whether we actually practice what we preach. When we stand in judgement of others, we need to understand that we too will be judged in the same way.