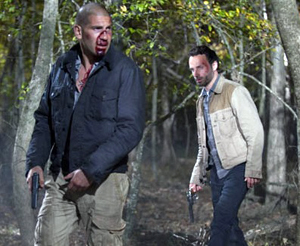 Shane and Rick finally face off… and Rick makes a very tough decision.

But isn’t that what this show is all about?

The creators of The Walking Dead are providing more answers and more closure each week as we approach the Season 2 finale. This episode helped wrap up some of those dangling plot points. For example, I was glad to see Lori and Shane resolve things at one level- especially knowing now that it was their last chance to make things right.

Episode 12 also cemented the fact: walkers don’t just come from the folks that were bitten- seems like everyone is infected!

This episode forced the viewer once again into the ethics of taking lives in the name of safety or self-preservation, but this time in a showdown between two of the major characters. It’s rapidly becoming evident… no character is safe in this show.

Water cooler discussions will quickly reveal that people’s ethics differ about these kinds of tough decisions. To me, Shane is a murderer and Rick was trying to protect himself and his family; but in talking with some of my friends about this topic, there are many ways to look at the deaths of Randall and Shane.

Apparently Rick, Carl and the rest of our beloved characters are struggling with these mixed feelings as well. It’s intriguing being a fly on the wall of so many of these conversations the show offers.

I was particularly moved by the scene at 19:26 with Rick and Carl when Rick is essentially giving Carl a ‘rite of passage’ speech:

Rick: What happened to Dale had nothing to do with you.

Rick: Yeah, yeah. Feels like there’s a lot of that going around. That’s why I need you. No more kid stuff. I wish you could have the childhood I had, but that’s not gonna happen. People are going to die. I’m going to die. Mom- there’s no way you can ever be ready for it. I try to be, but I can’t. The best we can do now is avoid it as long as we can, keep one step ahead. I wish I had something better to say, something—something more profound. My father was good like that. But I’m tired son.

SEASON 2, EPISODE 11 DISCUSSION QUESTIONS:
1. If you were Carl, would this talk have helped you? Why or why not?
2. What wisdom was Rick trying to impart to Carl?
3. What ‘rite of passage’ talks have you experienced with the adults in your life? Did they help?
4. What was Rick missing from his chat with Carl?

When I was a child, I spoke and thought and reasoned as a child. But when I grew up, I put away childish things.  Now we see things imperfectly, like puzzling reflections in a mirror, but then we will see everything with perfect clarity.

5. What does it mean to ‘put away childish things’?
6. What childish things have you put away in the last few years?
7. Why was it important for Carl to mature in his world?
8. Why is it important for you to grow in maturity in your world?
9. What does this verse mean, “but then we will see everything with perfect clarity”?
10. How does the hope of seeing Jesus face to face help us grow in maturity?

Wrap up
Most people probably wish they could remain in the innocence of childhood, but it is critical that we push on to maturity for the sake of our loved ones and ourselves. This week, think about what ‘childish things’ you are still holding onto, and how Jesus is calling you to focus on the future and what His calling to adulthood looks like for you.