Lord of the Rings: Return of the King, The (greed) 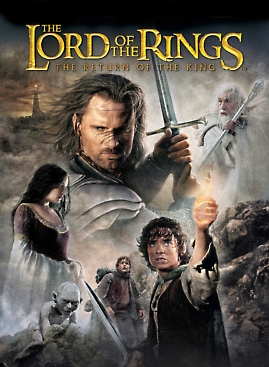 Main Point: Jealousy and greed never lead to a godly end. That’s why God gave us a standard about them in the 10 Commandments.

The Movie Clip: I Want It
The Return of the King was the conclusion of the epic trilogy The Lord of the Rings written by J. R. R. Tolkien. Though this movie shows us the end of the entire story, it starts off by giving us the backstory on how the well-known character Smeagol – later known as Gollum – originally got his hands on the all-powerful ring. This scene is an important one to all three movies, plus the prequel movie released later entitled The Hobbit. If Smeagol’s relative Deagol had never found the ring at the bottom of the lake, and Smeagol had never killed him for it, the whole story would likely have never taken place.

Introducing the Clip:
The Return of the King was the landmark conclusion to the exciting trilogy known as The Lord of the Rings. If you’ve seen those movies, you might remember the creepy character known as Gollum; he’s the alien-looking creature who’s obsessed with a golden and powerful ring. But unless you’ve read the books, you don’t know how Smeagol, aka Gollum, comes in contact with the ring in the first place. Take a look at this clip that opens the third and final movie to see the grim way he claims it as his own.

Note: This film is available for rent or purchase; pick up a copy and cue it up to the scene mentioned below.

The clip opens with Smeagol putting a worm on a hook as he sits in a boat with his relative Deagol. It’s not long before Deagol gets a bite, but is pulled out of the boat by the fish. While underwater, Deagol notices a glimmer in the sand beneath him. He grabs at it, and when he surfaces moments later, he realizes that he’s found a golden ring. Smeagol walks up to him, and the key conversation begins.

Smeagol: Deagol! Deagol! (When he sees the ring…) Give us that, Deagol, my love.

Smeagol: Because it’s my birthday, and I wants it. (He snatches for it, but Deagol closes his hand.)

The two characters begin to struggle as Smeagol attacks Deagol. Eventually, Smeagol gets the upper hand and kills his relative. He takes the ring from Deagol’s dead hand and holds it in front of his face.

Transitional Statement:
And now you know why Gollum was such a creepy guy: because Smeagol was creepy, too! But you also now see what jealousy and greed can quickly turn into. Smeagol saw the ring that Deagol found and wanted it for himself. He wanted it so badly, in fact, that he was willing to kill for it. And that’s just what he did. You know, jealousy and greed never lead to a godly end. In His infinite wisdom, God gave us a standard in the 10 Commandments that should guide us when it comes to greed and jealousy. Let’s talk about that for the next few minutes.

CONTEXT: Before you read this one verse, tell the students that this is one of the 10 Commandments that God gave the people of Israel through Moses on top of Mt. Sinai. God has just led the people out of slavery in Egypt, and He gives them His law so they will live a life that pleases Him. This is just one of the expectations that God has for His people.


Wrap Up:
Gollum will forever be known as the greedy little creature who wanted a ring worse than he wanted breath in his lungs. He was willing to go to any length to have it, including murder. There is no doubt – especially if you’re familiar with the story told in the movies and books – his greed and jealousy changed his life into something horrible and terrible.

And while our greed and our jealousy don’t cause us to look like Gollum, it does cause us to act like him. We become consumed with what others have, and more importantly, why we don’t. We complain. We envy. We make excuses. We secretly desire it. Eventually, if we don’t learn to control ourselves, we become obsessed with it and we become a different person.

But God has told us not to be jealous. We are given that command over and over in Scripture, plus lots of examples of what happens if we do become jealous of others. God knew what jealousy would do to our hearts, and so He simply says, “Don’t be jealous of others or their stuff.”

That’s easier said than done. We look at the rich on TV, or athletes in a competition, or a friend that we personally know, and it’s easy to become jealous of them for one reason or another. But we need to fiercely fight against that urge to become jealous. We now know what it leads to. It leads to destruction.

I would urge you to handle jealousy and greed the way Paul did. 2,000 years ago, he wrote these words to the people in Philippi:

Whatever you have learned or received or heard from me, or seen in me– put it into practice. And the God of peace will be with you. 10 I rejoice greatly in the Lord that at last you have renewed your concern for me. Indeed, you have been concerned, but you had no opportunity to show it. 11 I am not saying this because I am in need, for I have learned to be content whatever the circumstances. 12 I know what it is to be in need, and I know what it is to have plenty. I have learned the secret of being content in any and every situation, whether well fed or hungry, whether living in plenty or in want. 13 I can do everything through him who gives me strength. (Phil 4:9-13)

When we’re tempted to be jealous over something that someone else has, let’s do what Paul did and renew our focus on Jesus. If we have Him, we really do have everything we need.