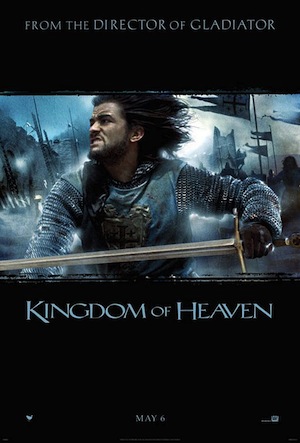 2005 Twentieth Century – Fox
MAIN POINT: Though people have tried many ways to erase their sin, only Jesus can.

THE MOVIE CLIP: Can My Sin Be Forgiven?

Kingdom of Heaven is set during the time of The Crusades. The movie centers on Bailian, played by Orlando Bloom, whose wife committed suicide after the death of their newborn son. Shortly thereafter, in a moment of rage, Bailian kills a “holy man” for telling him that his wife is condemned to hell for her actions.

After the murder, Bailian becomes a fugitive. As Bailian runs from his sins he meets his father, a Knight, whom he never knew, who promises to help him find the forgiveness he seeks if Bailian will join him in the fight of The Crusades.

INTRODUCING THE CLIP:
I want to show you a clip from a movie called Kingdom of Heaven. This is a movie that deals with a lot of issues like violence, guilt, shame, confusion, hatred and other problems that have plagued the church and Christians for hundreds of years. The clip you are going to watch involves a guy named Bailian (played by Orlando Bloom) who has just committed a horrible sin – murder – and now he is seeking out the answer to a question that we all have asked at one time or another, “Can my sin be forgiven?”

[Bailian rides to meet his father (Godfrey) after committing the terrible crime. The two meet on horseback in the middle of a road.]

Godfrey: If you’ve come to kill me…these days it’s not that easy. Well?

Bailian: I have done… murder.

Godfrey: Haven’t we all.

Ballian: Is it true that in Jerusalem I can erase my sins? And those of my wife? Is it true?

Godfrey: We can find out together.

END CLIP AT 12 minutes and 0 seconds.

TRANSITION STATEMENT: “Is it true my sins can be forgiven?” That’s a great question, isn’t it? Let’s take some time to explore that question together to see if we can figure out the answer.

DIVIDE INTO SMALL GROUPS:
Let’s go ahead and split up into our discussion groups, and then afterward we’ll come back together for a final word.

1 JOHN 1:5-10 (NIV):
This is the message we have heard from him and declare to you: God is light; in him there is no darkness at all. If we claim to have fellowship with him yet walk in the darkness, we lie and do not live by the truth. But if we walk in the light, as he is in the light, we have fellowship with one another, and the blood of Jesus, his Son, purifies us from all sin.

If we claim to be without sin, we deceive ourselves and the truth is not in us. If we confess our sins, he is faithful and just and will forgive us our sins and purify us from all unrighteousness. If we claim we have not sinned, we make him out to be a liar and his word has no place in our lives.

JAMES 5:16 (NIV)
“Therefore confess your sins to each other and pray for each other so that you may be healed. The prayer of a righteous man is powerful and effective.”

– AROUND THE CIRCLE: Turn to the person next to you and say, “I have sin in my life. Would you pray for me?” If you are comfortable sharing more, then do so. Then pray together for forgiveness and the strength to follow hard after God!
WRAP UP:
Maybe you’ve had a time or so in your life when you’ve felt a little like Bailian. Granted, you probably didn’t kill anyone, but you definitely knew what it was like to desperately search after forgiveness for something you did wrong. When you realize that you’ve sinned, and that sin stands between you and a relationship with God, you want to do whatever it takes to get forgiveness from that sin. Forgiveness becomes a HUGE deal!

That’s right. 2,000 years ago, Jesus paid for all of our sins – past, present, and future – so you can take Him up on His offer to forgive you right now.
If you want to talk more about this after we close, grab one of the adult leaders. We’d love to chat with you about finding forgiveness.