The Gospel According to the Walking Dead – Season 4, Episode 5 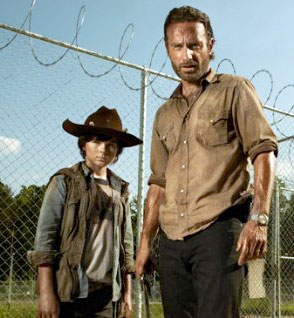 This week’s episode provided some great father/son moments between Rick and Carl. Rick faces the reality that many parents experience… letting their kids move from the kids’ table to the “grown-up” table.

With Thanksgiving and Christmas around the corner, I’m pretty excited that my two oldest kids will be coming home from college to join us for the holidays. For years the tables were so full that we had a kids’ table and a “grown-up” table.

When the kids were young, they enjoyed the kids’ table. My son would talk about his newest Mario game and his sisters would discuss their favorite characters in Barbie Mermaidia. But soon they outgrew the kids’ table and desired more mature conversation. The kids’ table eventually disappeared, the teenagers got driver’s licenses, jobs… and they joined the adults at the big table.

This week on The Walking Dead… Carl moved to the grown-up table.

We’re in episode 5 now, and things are looking bleak for the group. Most of the group is sick or dead at this point and few people remain to help out. Carl wants to help, and early in the episode, his dad is hesitant:

Rick: I was gonna ask you that.

Rick: No one’s sick? (pause) You didn’t have to… do anything?

Carl: Haven’t had to use my gun, Dad.

Rick: Good. We found some food on the run. (He hands Carl a bag.) There’s a bunch of fruit leather in there. Just have everyone brush their teeth after.

Carl: Can we come out soon?

Rick: Not just yet.

Carl: Dad, I was around you when you were in the middle of it, and I was around Patrick. I didn’t get it (talking about the sickness). I can help you.

Rick: Thanks, but, I need you to stay here.

Carl: From what always happens.

Carl shows maturity in this conversation, obeying his father, but letting him know, “I can help you.”

Later in the episode, Rick is in dire need of help, so he fetches Carl and asks for help. At first, Rick keeps trying to do much of the “heavy lifting.” But Carl assures his dad, “Dad, let me help.” Rick begins to see Carl become a man.

The episode goes on to provide a great dad/son moment, side by side, shooting zombies, tossing each other clips.

1. What was your favorite moment of this episode?

2. If you had to face off 100 oncoming zombies, which family member would you want at your side? Why?

3. Why has Rick been hesitant to let Carl help him?

4. Why do parents sometimes resist their kids’ growing up?

7. Carl told his dad, “You can’t keep me from what happens?” What was he saying?

8. Why do parents try to keep their kids from the “tough happenings” of life?

9. When should parents start loosening their grip a little bit and let their kids have more freedom and develop more responsibility?

11. What will you do differently with your kids?

12. If you could give your parents one piece of advice about raising you and trusting you with responsibility, what would you tell them?

13. What is one piece of advice that you probably need to hear from them?