Chronicles of Narnia, The – Jesus Forgives 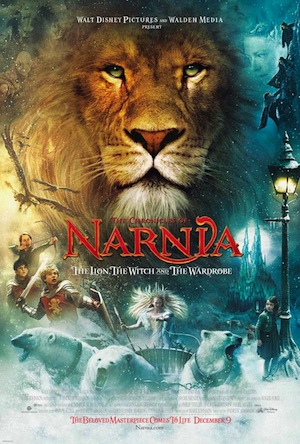 (Disney, 2005)
Main Point of Discussion: Jesus is willing to forgive us of our sin.

The Movie Clip: “Every traitor belongs to me. His blood is my property.”

The Chronicles of Narnia: The Lion, the Witch, and the Wardrobe is a fictional story based on the true message of the Bible: there is a God who loves us so much that He is willing to give His life for ours! This is a fantastic movie about a lion king named Aslan who pays the ultimate price for people’s disobedience in order to protect and save their lives.

Introducing the Clip:
The Chronicles of Narnia is a fantastic film because it tells a great story, a story about a king who loves his people so much he gives his life for theirs. Just prior to the scene we are about to watch, Edmund had sided with an evil Witch and betrayed his family and friends. But, he eventually sees through her lies and has a change of heart. Edmund then gets rescued by King Aslan’s forces, but unfortunately for Edmund, the law of the land demands that a traitor’s life belongs to the evil Witch. Let’s take a look at this clip to see how King Aslan handles the situation.

Henchman: Jadis, The Queen of Narnia. Empress of the Lone Islands. (The crowds murmur against her presence.)

The Witch: You have a traitor in your midst, Aslan.

Aslan: His offense was not against you.

The Witch: Have you forgotten the law upon which Narnia was built?

Aslan: (Roars) Do not cite the Deep Magic to me, Witch. I was there when it was written.

The Witch: Then you’ll remember well that every traitor belongs to me. His blood is my property. (At this, Edmund’s older brother Peter unsheathes his sword and steps toward the Witch.)

Peter: Try and take him then.

The Witch: Do you really think that mere force will deny me my right, little king? Aslan knows that unless I have blood, as the law demands, all of Narnia will be overturned and perish in fire and water. That boy will die on the Stone Table as is tradition. You dare not refuse me.

Aslan: Enough! I shall talk with you alone. (He and the Witch step into his tent to converse while the others wait outside. When they finally step back out, the Witch has a look of satisfaction upon her face, while Aslan seems upset. The Witch walks past Edmund without saying a word and gets back on her chariot.)

Aslan: She has renounced her claim on the Son of Adam’s blood. (The crowd cheers, but Aslan does not look happy over the news.)

The Witch: How do I know your promise will be kept? (Aslan roars and the Witch shrinks away in fear.)

(While the crowd continues to celebrate, Lucy looks at Aslan and smiles, but realizes he does not smile back. Instead, he appears to be deep in thought, sadden by what has just happened. Lucy’s own smile quickly disappears.) END CLIP AT 1 hour 35 minutes and 17 seconds.

Transitional Statement:
In this clip, we saw the king of the land grant forgiveness to the young man Edmund, who had clearly sinned by betraying his family and friends. The evil Witch wanted the young boy to be killed, in accordance with the Law, but King Aslan pardoned him. But this wasn’t the only time a King pardoned a person who was undeniably guilty of sin.


John 8:1-11 (NIV)
1But Jesus went to the Mount of Olives. 2At dawn he appeared again in the temple courts, where all the people gathered around him, and he sat down to teach them. 3The teachers of the law and the Pharisees brought in a woman caught in adultery. They made her stand before the group 4and said to Jesus, “Teacher, this woman was caught in the act of adultery. 5In the Law Moses commanded us to stone such women. Now what do you say?” 6They were using this question as a trap, in order to have a basis for accusing him.

But Jesus bent down and started to write on the ground with his finger. 7When they kept on questioning him, he straightened up and said to them, “If any one of you is without sin, let him be the first to throw a stone at her.” 8Again he stooped down and wrote on the ground.

9At this, those who heard began to go away one at a time, the older ones first, until only Jesus was left, with the woman still standing there. 10Jesus straightened up and asked her, “Woman, where are they? Has no one condemned you?”

“Then neither do I condemn you,” Jesus declared. “Go now and leave your life of sin.”


Wrap Up:
Tonight we watched a scene from a very famous movie, The Chronicles of Narnia. In it, Edmund had to face the consequences of his sin. There was no doubt that Edmund was guilty and the witch knew it. In fact, she was so confident that Edmund was guilty, she was willing to face Aslan and his forces at his camp to prove it. But, instead of seeing the witch get to kill Edmund as she intended, we see Aslan speak with her privately. After Aslan speaks with the witch, the witch turns and leaves, because Aslan has forgiven Edmund.

Then we read a story from the Bible that told an almost identical story. A woman had been caught in the act of adultery, so there was no doubt she was guilty. Her accusers were so sure of it that they brought her to Jesus to prove it. Unfortunately for them, but fortunate for her, Jesus forgave her of her sin, and did not condemn her to the death she deserved. Then Jesus told her to stop sinning.

While the story from The Chronicles of Narnia is only a fictional account of forgiveness, the story from the Bible is a completely true one. This story is in the Bible for a couple of reasons. First, it’s true. Jesus really did forgive this woman even though she was completely guilty of her sin. Secondly, it shows us how Jesus is willing to forgive us of our sins. No matter what we’ve done, or how humiliating or shameful it is, Jesus will forgive us.

Jesus could forgive the woman because, like Aslan in the movie, He was willing to lay down His life for those He loved. I didn’t show you the end of the movie, but at its close, we see Aslan give his life in exchange for Edmund’s. At the end of Jesus’ ministry on earth, He gave His life on a cross in exchange for ours. That’s why Jesus could forgive the woman and did. And that’s why Jesus can and will forgive each of us.

As we close in prayer tonight, if any of you want to talk about this more, just grab one of our adult leaders or me. We would be VERY HAPPY to discuss this with you further.