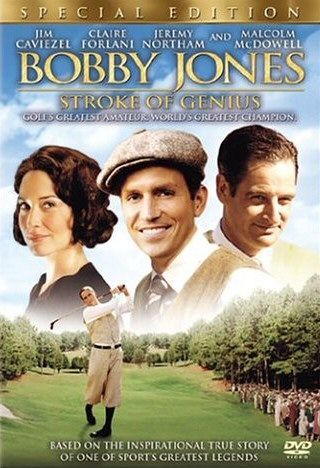 (Film Foundry Releasing, LLC 2004)
Main Point of Discussion: Being a person of integrity means doing what is right even when no one is looking, and especially when it costs you something.

The Movie Clip:
Robert Tyre Jones, Jr., aka “Bobby Jones” (Caviezel) rose from complete obscurity to become a golfing legend during his lifetime. Jones overcame his own fierce temper, intense passion, and perfectionist tendencies to master the game and win the Grand Slam (the U.S., British, and Amateur Opens in golf, a feat unequaled even today). But it is Jones's style, personality, and character that separated him from the other professionals in his field.

In this clip, Jones realizes that his unparalleled success may be destroying those he loves, so he's presented with an astounding proposition, one that shocks the world.

Introducing the Clip:
Today I want to show you a clip from the movie Bobby Jones: Stroke of Genius the true account of one of the greatest golfers ever. This scene is taken from Jones' play during the U.S. Open Championship, arguably the most important tournament in golf. During this scene, Jones thinks he unintentionally moves his ball prior to swinging at it. If it’s true, he has to take a one stroke penalty. As we watch the clip, put yourself in his place and try to imagine how you would react in this situation.

Scene Script:
The clip can be found at this link: http://www.youtube.com/watch?v=aQ5Gr2joVe8

Official: Bobby…we’ve talked with Walter, all the officials, and several people in the gallery. Nobody saw your ball move. Seems a matter for you to decide. Are you sure you caused that ball to move?

Bobby Jones: I know I did. (Officials nod and mark the penalty stroke)

Official: You’re to be congratulated son.

Bobby Jones: Sir, that’s like congratulating a man for not robbing a bank. I don’t know how else to play the game.

O.B. Keeler: Bobby Jones lost the US Open by one stroke. In calling a penalty on himself, he demonstrated for all of us the highest ideal of sportsmanship and personal honor. I’m prouder of him than if he’d won. There are things finer than winning championships.
Transitional Statement:
This scene is an amazing picture of personal integrity and honor-especially when you think about the fact that it really happened, and it ultimately cost Bobby Jones the US Open Championship. Let’s spend a few minutes talking about integrity and honor in our lives, what it costs to display them, and the benefits of doing so.

1Who may worship in your sanctuary, LORD?
Who may enter your presence on your holy hill?
2 Those who lead blameless lives and do what is right,
speaking the truth from sincere hearts.
3 Those who refuse to gossip
or harm their neighbors
or speak evil of their friends.
4 Those who despise flagrant sinners,
and honor the faithful followers of the LORD,
and keep their promises even when it hurts.
5 Those who lend money without charging interest,
and who cannot be bribed to lie about the innocent.
Such people will stand firm forever.


Wrap Up:
Our culture today definitely has a ‘win at all costs’ kind of attitude, but as the sportswriter said in the movie: 'there are things finer than winning championships.’ One of those ‘things’, according to Psalm 15, is a deeper relationship with the God who made you and receiving a deep sense of His presence. In fact, the promise of a life of integrity is that we will never be ‘moved’ or ‘shaken’. In other words, when we keep our promises and live life with honor, we can be confident that God literally has our back. I want to give us a chance to really think through how we can line up or lives with this Psalm and experience a deeper relationship with Christ and sense His presence in our lives- believe me, there is nothing ‘finer’ than that.

Pass out a copy of Psalm 15 or put it on the screen/board and ask students to rewrite the Psalm in their own words. Have them think through which areas they need to work on and write out prayers asking God to help them. After a few minutes, ask if any of them want to share with the group, then close in prayer and invite people to trust Christ.