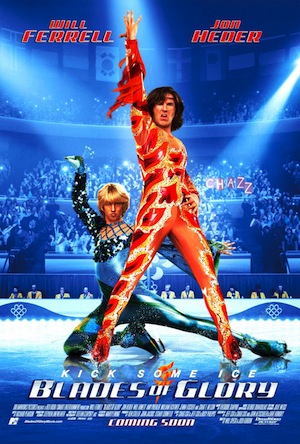 (DreamWorks Pictures, 2007)
Main Point of Discussion: We must identify and get rid of the idols in our lives.

The Movie Clip: “It’s not just a brush. It’s a Verticoli.”

Blades of Glory is a hilarious movie starring Will Farrell and Jon Heder (Napoleon Dynamite). Both are rival men’s singles ice-skaters, who are banned from ice-skating forever when they get in a fight with each other during the award ceremony at the world championships. The only way they can continue their careers in ice-skating is to partner together in couples’ skating. The movie is very funny and creative. However, there are many crude sexual jokes, and there is some language too. I definitely wouldn’t show the movie on the bus on the way to our Jr. High Relationships Retreat, and I would highly recommend viewing it before showing it to your children.

The clip being shown is a great illustration of what an idol is. Chazz (Will Farrell) and Jimmy (Jon Heder) are now roommates. While they unpack their things for the first time, the focus is turned on Chazz’s hair product. Now Chazz introduces his Verticoli, a super-expensive designer hairbrush. He ends the discussion by saying that he couldn’t love a human baby as much as he loves the brush. The clip begins at approximately 32:02 in the middle of chapter 5, after the discussion about Chazz’s horse shampoo (in that particular dialogue, Chazz uses one off-color word—bummer). The first line of this clip we’re showing is, “And then I brush my hair 100 times with this.” The clip ends at the end of the scene, after the two begin to climb into their beds, at approximately 33:07.

Introducing the Clip:
Today we are going to show a clip from a movie called Blades of Glory. In the scene, Chazz and Jimmy are new skating partners, and they are just moving in as roommates. As they unpack their stuff, Chazz is going to show something that is really important to him. This is a really funny clip, but I want you to pay close attention to how Chazz describes this valuable object. After the clip, we’ll discuss it.

Chazz: And then I brush my hair 100 times with this. (He opens the box to reveal a hairbrush.)

Chazz: Not just a brush, but a Verticoli. Handmade in Italy. They carve it out of illegal whalebone. They only make eleven of them a year. This one cost me $12,000 or 30 million lira. Perfectly balanced, low drag, minimal torque.

Jimmy: (reaching for the brush) How minimal?

Chazz: (pulls the brush back) I bet you’d like to know. Hey, help yourself to the Mane n’ Tail all you want, but don’t even look at the Verticoli. ‘Cause I will knock your block off. No exaggeration, I could not love a human baby as much as I love this brush. (He kisses the brush and places it back in its box.)

Jimmy: (going to climb the bunk bed) I call top.

Chazz: Sorry, I already called it in my head.

Jimmy: What? No, you can’t do that. That doesn’t count.

Chazz: Yes, it does. Get used to it, Jimmy. You’re in Chazz’s world now.

(The two guys climb into their beds.)END CLIP at 33 minutes and 7 seconds.

Transitional Statement:
You know, it’s true that this scene is pretty ridiculous. The way that Chazz loves that hairbrush—excuse me, Verticoli—is totally over the top. But at the same time, there is some truth in this scene. Just like Chazz, Will Farrell’s character, there are sometimes things in our lives that steal our focus, things that we love just a little too much. Have you ever met someone who loved one of their possessions just way too much? Well, that’s what we’re talking about today. When we love something so much that it steals our focus from what’s really important, we call that thing an idol. Today we’re talking about how to identify our idols in our lives, what to do with them, and how we can learn to stay away from them in the future.

Habakkuk 2:19-20
“Woe to him who says to wood, ‘Come to life!’
or to lifeless stone, ‘Wake up!’
Can it give guidance?
It is covered with gold and silver;
there is no breath in it.
But the Lord is in his holy temple.
Let all the earth be silent before him.”

Colossians 3:5
“Put to death, therefore, whatever belongs to your earthly nature: sexual immorality, impurity, lust, evil desires and greed, which is idolatry.”


So as you can see, idols are not always objects. They can also be sinful desires or attitudes.

Wrap-Up:
You know, it’s difficult when we realize we have an idol in our life. It’s something that we know we should try to get rid of because it hurts our relationship with God, but it’s also something we want to keep, because, well, it’s an idol. But according to the passage we read in Habakkuk, it’s just empty. It’s not something that is going to give me guidance. It’s not going to bring me tons of peace or fulfillment. In fact, it’s going to steal those things from me. And your idol will do the same to you. So like Paul says, we need to get rid of our idols. I want you to remember what you’ve committed to today. Tomorrow is another day, and it will be so easy to fall back into the same routine, focused on the same worldly things we have gotten caught up in before. So tomorrow, let’s remember our commitment. Let’s remember what we said we would do.